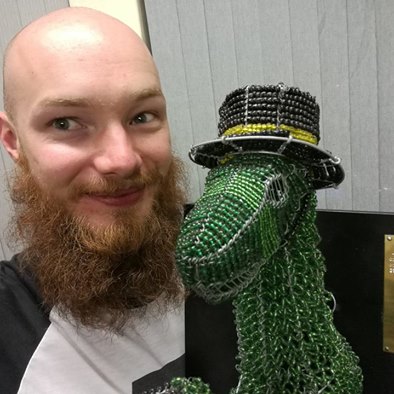 An important element of the newly announced gigantic new species of dinosaur are the illustrations that bring to life the scientific research. Wits MSc student (Palaeontology) Viktor Radermacher is the person behind the breathtaking visuals that accompanied the global announcement on September 29th—and he is fast becoming recognised as both a palaeoscientist and palaeoartist. Victor’s work has been on display earlier this year in international publications on Shartegosuchus as well as the recent publication on Chinese Alvarezsaurs, another international collaboration involving Prof. Jonah Choiniere who led the international team describing Ledumahadi mafube. One of PAST’s key programmes is supporting students at African universities, and we’re inspired by Viktor’s wide-ranging accomplishments. We spoke to him about dream jobs, working on Ledumahadi mafube and what inspires him.

Tell us a little about yourself?

I am a bit of a career Peter Pan in that my idea of a dream job has never grown up. I’ve wanted to be a palaeontologist since before I could even say the word properly. Spending my formative years in the Garden Route had me falling in love with all of nature’s majesty, with my affections only growing fonder the more I learnt about evolution and the bizarre manifestations life takes when carved by natural selection. One can’t help but imagine how ancient animals looked and moved, and my art has always striven to balance imagination, scientific accuracy, and visual interest and drama.

What are you studying at present?

I am a Master’s student studying the a little South African dinosaur called Nqwebasaurus, which is a much smaller cousin of T. rex. I am looking at high powered X-ray images of this specimen to find more pieces of its anatomy so that I can figure out where it sits exactly in the dinosaur family tree.

What was your role in the team that has introduced Ledumahadi mafube to the world?

I was the scientific illustrator, reconstructing what this animal looked like when alive and in its environment, as well as helping with some of the technical figures in the paper that describes this new dinosaur.

How did you get into the palaeosciences and also become a palaeoartist?

I primarily entered into the palaeosciences for research and so I studied a double major in Geology and Zoology at Wits and Stellenbosch University. My artistic skill is something that I developed on my own with the intention of applying these skills to bring ancient animals back to life.

How important is the work that you do in the palaeosciences?

I don’t think photos of bones are always enough for people. It’s often very challenging to figure out which bone corresponds to which part of an animal’s anatomy—even for us “experts”. Having an artist “resurrect” these animals by reversing time and re-applying flesh, skin, and attitude to these bones can really help people visualise and connect with these discoveries.

What was it like working on the reconstruction of Ledumahadi mafube?

It was an absolute privilege working on this piece. From a technical standpoint, it was one of the more challenging artworks I’ve made. I’m a sucker for traditional art—not that I have anything against doing things digitally —I really just enjoy the tactile feeling of pencil and pen on good quality paper. This piece, like my others, is a combination of my two main sources of inspiration: I love the fine detail of old scientific illustrations where everything was stippled in and how clean it all looks, but I also really love the heavy shadows, sharp contrast, and visual drama of comic books. My style strives to be a marriage of these two seemingly disparate influences. After I’ve inked it all in, I then use washes of watercolour and gouache to apply colour.

What advice would you give to other young individuals interested in doing what you do?

Make your own opportunities. Reach out to people and put yourself out there. Develop focus and soak up as much information as you can. Never stop learning.

Announcement: 2020 Life in the Universe Symposium co-hosted by PAST
22 October 2020